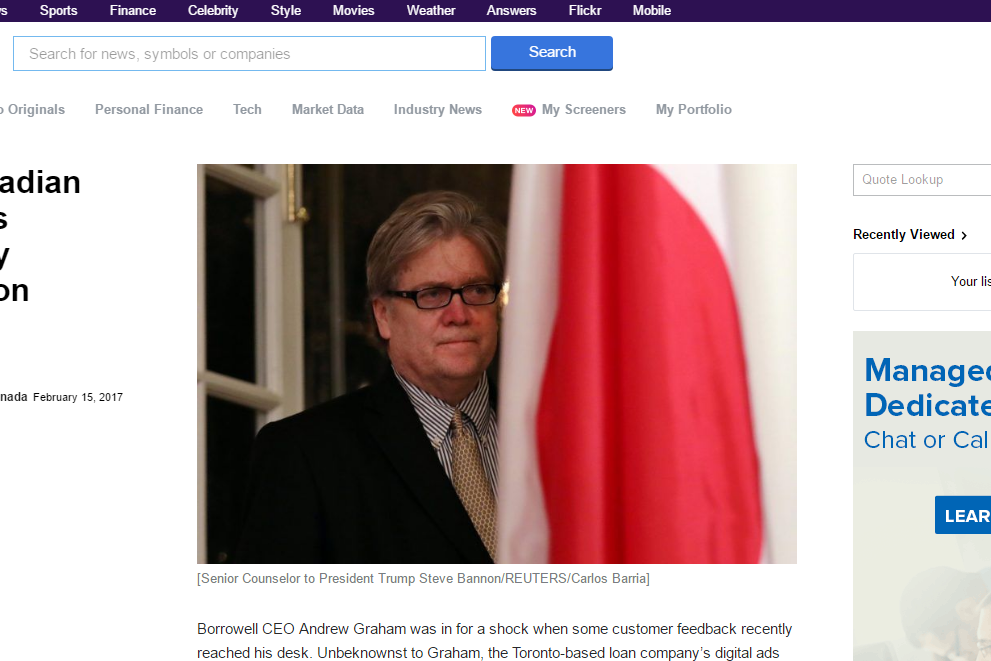 Borrowell CEO Andrew Graham was in for a shock when some customer feedback recently reached his desk. Unbeknownst to Graham, the Toronto-based loan company’s digital ads were running on the website of Breitbart News Network. That’s the far-right outlet formerly run by Stephen Bannon, the notorious White House adviser who’s been described as a white supremacist. It’s not a place Borrowell cares to promote itself.

“Our customers know what our values are, and it was great to get that alert so we could move quickly,” he says. “We’re a data- and fact-driven company. About one third of employees were not born in Canada. We’re a diverse and inclusive company.”

Graham’s piece of advice to other business leaders who don’t want anything to do with Breitbart or any similar platform is to take a closer look at how their organization’s digital marketing campaigns are structured. Borrowell uses Google Display Network, its ads appearing on close to 14,000 websites around the world. It’s easy enough to prevent ads from showing up places you don’t want them to via an exclusion list, however, with Google having access to millions high-traffic sites, it can be challenging for businesses to keep up.

Network advertising involves the use of technology that targets and personalizes ads in real time. Most ads are placed based on data about users – specifically, where they’re roaming on the Web — rather than the content of any given website.

“If you set up a campaign that was too general… you leave it to the network to display ads anywhere; it could be ESPN, CNN, or Breitbart,” says Adolfo Montenegro, managing partner of Toronto’s DMX – Digital Marketing Experts. “[Digital ad] campaign managers need to go further and look at websites where they do not want to have their ads displayed and really dig down into the details.

“It can be done, but it’s a whole new world,” he says. “Companies want to distance themselves from the politics,” he says. “They want to stay away from any blog sites that have to do with politics; don’t want to be anywhere near that. Things can go sideways. You never know what could happen to interfere with the business nowadays.”

Borrowell isn’t the only Canadian organization that has found itself inadvertently advertising on the controversial website.

The University of British Columbia and the University of Montreal both pulled ads recently after discovering that promotional material was appearing on the Breitbart site.

Mountain Equipment Co-Op is another venture that halted its ads from appearing on Breitbart, after relying on a service to automatically publish ads on web sites based on a customer’s browsing history.
“When members alerted us to MEC ads appearing on Breitbart, we immediately took steps to suppress our ads from appearing there again in the future,” MEC said in a statement. “As a values-based Canadian retail co-operative, MEC does not wish to be associated with web sites of any political stripe that trade in extremist views.”

An organization called Sleeping Giants is on a mission to get companies to stop advertising on Breitbart. In November, it tweeted: “We are trying to stop racist Web sites by stopping their ad dollars. Many companies don’t even know it’s happening. It’s time to tell them.”

The campaign is working: since then, hundreds of businesses have pulled ads, including Lyft, T-Mobile, Kellogg’s, BMW, Visa, and the Vanguard Group, an investment management company.

Other companies, such as Nissan, have stated that their goal is reach as many customers as possible and don’t have any plans to change their advertising strategy.

The anti-Breitbart sentiment has picked up in Canada in other ways. Shopify CEO Tobias Lütke, for instance, has received criticism for refusing to stop hosting Breitbart’s online store.